His releases run up major streaming numbers but Tokyo Jetz doesn’t believe that NBA YoungBoy receives enough applause for his talents. The Louisiana rapper has been incarcerated for most of the year after being arrested in Los Angeles. YoungBoy faces weapons charges and has been denied bond, but he continues to release new music and keep his […]

Regardless of how big Sada Baby gets, he’s committed to taking on the DIY approach when it comes to releasing music. The Detroit rapper has been steadily dropping music on YouTube channels that don’t necessarily belong to him. However, all these loose gems he releases rack up numbers, proving that he’s still applying pressure on […]

USA’s Tatum out of Argentina game due to knee 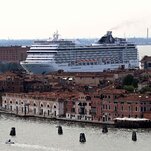 In a landmark move, Italy’s cabinet on Tuesday declared the lagoon a national monument and banned large cruise ships from entering starting Aug. 1.

Griselda is still riding high in the rap game. With Westside Gunn preparing to drop another two project before the year’s end, Benny The Butcher and Conway have been keeping their loyal and dedicated fanbase with new music on a regular basis. Now, the two have linked up alongside Rick Hyde for a brand new […]

After comedian Ziggi Tyler called out TikTok, the company has reportedly issued a response. Recently, Tyler’s videos went viral after he showed that TikTok allowed words like “neo-Nazi,” “pro-White” and “White supremacist” to be included in bios for the Creator Marketplace, but other phrases and terms including “pro-Black,” “Black Lives Matter,” “Black success,” and “Black […]

Jake Paul Says He’ll Knock Out The Game For Charity

Like him or not, Jake Paul is making a pretty interesting transition from his career as one of the most popular YouTubers on the platform to an actual boxer. He’s currently 3-0 and recently announced a date for his match against Tyron Woodley. There’s been criticism about his winning streak but he’s determined to prove himself in […]

Lil Wayne broke off his engagement with Nivea in 2003 but the singer married The-Dream in the following year.

Cardi B and Offset celebrated the third birthday of their daughter Kulture this weekend. The princess-themed extravaganza was decked out and packed with family and friends. It was towards the end of the party when both Offset and Cardi revealed their gifts for their daughter. Offset gifted his three-year-old an iced-out Richard Mille watch that’s said […]