Damian Lillard Says He Has Not Yet Requested A Trade

Portland Trail Blazers star Damian Lillard has denied reports that he has requested a trade, amidst growing rumors that he is running out of patience with the franchise. Lillard says the reports are simply “not true.” “I woke up to those reports, a lot of people reaching out to me,” Lillard said. “But it’s not […]

The death of ap icon Eazy-E came quickly. It was back in 1995 when the 30-year-old was admitted to the hospital and weeks later, he publicly shared he’d be diagnosed with HIV/AIDS. Ten days after that revelation, the N.W.A. legend passed away, and in the decades that have followed, there have been stories, speculative reports, […]

Despite being on the verge of releasing Pretty Bitch Music, Saweetie says her mother isn’t all too happy with the project. In a new interview with Billboard’s Chelsea Briggs, the “Best Friend” rapper explains that she explores her cultural roots on the project, and her mother, who is Filipino and Chinese, was surprised. “I do talk some s— in Tagalog,” […]

Lillard said he expects to be in a Blazers uniform next season but made it clear he wants to see changes that will elevate the roster.

Megan Fox says that she made a pros and cons list before she started dating Machine Gun Kelly. The two have been inseparable in the public eye since they began dating last year. “When I met [him], I knew instantly that this is a soul I’ve traveled with before, that this was a soul-mate connection, and […]

A federal judge has denied Dame Dash’s request to get a temporary restraining order, a move that would’ve blocked Friday’s shareholder meeting at Roc-A-Fella. Dash is reportedly attempting to sell his 1/3 interest in the company but claims Jay-Z is working to block him from doing so. Instead of allowing the temporary restraining order, the judge recommended Dash sue if he […] 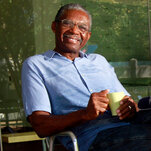 Mr. Robinson became a fan favorite as Mac, a levelheaded clerk surrounded by oddballs, on the long-running NBC courtroom comedy.

New York rapper Eli Fross (real name Elijah Quamina) was allegedly responsible for a road rage incident in Times Square, earlier this week, which resulted in Fross firing several shots from his vehicle. Fross was arrested by police Thursday. Fross and his driver were reportedly involved in an argument with a motorcyclist early Wednesday morning, after which, the […]

Earlier this year, Lil Nas X found himself at the center of controversy after controversy, starting with the Satanic visual themes in his chart-topping single “MONTERO” and continuing with the uproar surrounding his devilish Airmax collaboration with MSCHF. The boundary-pushing artist recently revealed that his label has finally given him the green light to release more music following the chaos […]