Colts owner Jim Irsay added to his extensive music collection with the $915,000 purchase of a piano used for decades by Elton John on his tours.

In a clip caught by TMZ, Dame Dash walks directly into a glass window while prepping for an episode of The Cray podcast with Rob Weiss, Shawn Chase, and O’Neal McKnight, on Thursday.  While trying to enter the recording room, Dash walks face-first into the clear glass in front of him. The rap industry mogul should be just […]

Denver Nuggets wing Will Barton has declined his $14.7 million player option for the 2021-2022 season and will become a free agent, sources told ESPN’s Adrian Wojnarowski.

Denver Nuggets wing Will Barton has declined his $14.7 million player option for the 2021-2022 season and will become a free agent, sources told ESPN’s Adrian Wojnarowski.

The Bucks will be without Thanasis Antetokounmpo, and some team staff, in Game 5 vs. the Suns, after he entered the NBA’s COVID-19 health and safety protocol hours before tipoff, and the league also had to shuffle its referee rotation for the same reason.

Billie Eilish says she constantly thinks about interviews she gave when she was younger and how much she’s changed since then. Her debut song, “Ocean Eyes,” was released in 2015 when she was just 14-years old. Eilish discussed growing up in the public eye in a new interview with Vogue Australia, earlier this week. “I said so […]

According to TMZ, the couple spent Fourth of July in San Francisco dining at Mourad.

R. Kelly has lost two members of his legal team, after lawyers Steve Greenberg and Michael Leonard officially withdrew from the case, after Kelly hired two new lawyers to help represent him. Greenberg and Leonard say its “impossible” for them to work alongside attorneys Thomas Farinella and Nicole Becker. “Our reasons for withdrawal are significant and it […]

Any Rapper Challenging 50 Cent In Verzuz May Be SOL

The Hip Hop legend offered up some crystal clarity as to why he won’t ever participate!

How Covid-19 Has Upended Life in Undervaccinated Arkansas 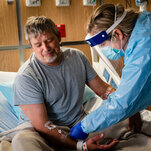 While much of the nation tiptoes toward normalcy, the coronavirus is again swamping hospitals in places like Mountain Home, in a rural county where fewer than one-third of residents are vaccinated.