Getty Image It’s been a couple of years since a new project from Tinashe was released, but 2019’s Songs For You turned out to be one of the most well-received releases of her career. Now the singer has announced the title and release date of her forthcoming fifth album. 08062021 pic.twitter.com/6AYlTJg3Tm — TINASHE ³³³ (@Tinashe) […]

He’s the second YBN member to officially drop the acronym from his name, and now Almighty Jay has more to celebrate. While it is true that there was a more peaceful transition when Cordae decided to be known as a mononymous rapper, things weren’t as smooth with Jay. He had public arguments with YBN Nahmir but […]

Brooklyn is still carrying the flag strong for the drill scene. Though it blew up into mainstream consciousness in the past year, the underground artists that are bubbling from Brooklyn and beyond are delivering some of the rawest rap music out right now. Among those is Winners Circle Entertainment artist Eli Fross whose 2020 album Cesar […]

The latest episode of Snack Review has officially arrived, and it features none other than Atlanta-based rapper Childish Major. The 30-year-old recording artist stopped by to test out some of the most eccentric snacks we could find at the corner store, offering up his harsh opinion for each unfamiliar food that he tried. He started […]

Kanye West is allowing the music to speak for itself in his rollout for DONDA, even if he hasn’t dropped a single off of the project. He hasn’t made any wild tweets or any contentious statements on TMZ (at least not yet) while members of his inner circle have provided updates on DONDA to the outside world. ‘Ye […]

The last thing Drake needs as he prepares for the release of Certified Lover Boy is a court case hanging over his head. An incident that allegedly occurred at a nightclub back in 2018 found the rapper along with Younes Bendjima, Kourtney Kardashian’s ex, and Odell Beckham on the receiving end of a lawsuit filed in […]

After an 18-month hiatus, the NCF has returned with the fifth anniversary celebration at the RFK Campus in Washington, D.C.

The Year of Purchasing and Purging 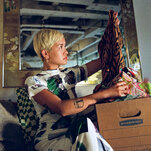 The pandemic spurred people to buy. It also compelled them to shed their belongings and their old identities.

The 50 For 50 campaign is in honor of 2Pac’s 50th Birthday and his late mother Afeni Shakur representing herself on trial over 50 years ago as she was acquitted while pregnant with the ‘All Eyez On Me.’

If it wasn’t already clear with the release of “Miss The Rage” in May, Trippie Redd isn’t playing with his highly anticipated fifth studio album Trip At Knight. Following the success of his previously mentioned Playboi Carti-assisted single, Trippie Redd doubled back and shared a single with another artist who was able to transcend the SoundCloud […]