Lakers Makes Their First Move Of The Offseason

This past season was an extremely difficult one for the Los Angeles Lakers. While the team had a tremendous start to the season, things quickly went downhill as both Anthony Davis and LeBron James faced injuries near the playoffs. While the team eventually made it to the playoffs, the Lakers were still forced into the […]

Entering his 18th season, Pittsburgh Steelers quarterback Ben Roethlisberger feels “fresher” than he did this time a year ago.

Zeke on upcoming season: ‘I got a lot to prove’

Dallas Cowboys running back Ezekiel Elliott says he doesn’t need any extra motivation after coming off the worst statistical year of his career.

We’ve all bore witness to the rising reports of rappers being arrested in recent years. Just as an artist is seen receiving their due after working hard to crawl their way out of the trenches, authorities detain them on charges spanning from weapons to assault to fraud to drug possession to racketeering to murder. Right now, there are […]

What I Saw in Yosemite Was Devastating 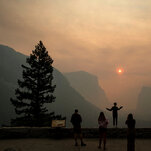 What does it mean if we can’t protect even our protected land from climate change?

Tragic news is coming out of the NFL today as it is being reported by numerous sources that New York Jets assistant coach Greg Knapp has passed away today at the age of 58. Just last weekend, Knapp was struck by a car while riding his bike San Ramon, California and was eventually sent to the […]

Kanye West Prepares For “DONDA”, HBCU Offers Resolution On Behalf Of His Mother

This may as well be labeled “Kanye West Week” in music history books because the takeover is real. The Chicago icon will finally release his long-anticipated album DONDA this evening following his listening party in Atlanta. It has been reported that West has set aside thousands of seats for the event for students at nearby […]

Here Are the Most-Streamed Rappers of 2021 So Far

Some of rap’s biggest names made the list. Continue reading…

Gilmore, who suffered a partially torn quad in December, was placed on the PUP list after reporting to camp on Thursday.